A quick guide to COP26

COP stands for Conference of the Parties, an annual international climate change summit organised by the United Nations for the past three decades (COP1 was held in Berlin, Germany in March 1995).  The UK currently holds the COP presidency and is hosting the 26th summit in partnership with Italy. ‘COP26’, as it is therefore known, was due to be held in 2020 but was postponed because of the coronavirus pandemic.  It is now being held in Glasgow between 31st October and 12th November this year.

The summit is held principally for the 197 parties (196 countries and the EU) of the United Nations Framework Convention on Climate Change (UNFCCC – see under ‘what else you need to know’).  It will be attended by delegates from all those countries as well as members of the press and media and representatives of ‘observer organisations’ - these are non-governmental organisations (NGOs) and inter-governmental organisations (IGOs) who are permitted to attend to observe, rather than participate.

The summit opens for two weeks, kicking off with a two-day World Leaders Summit.  Leaders from all countries will put forward their ‘Nationally Determined Contributions’ (NDCs).  These are ambitious plans on how each country will reduce their emissions, as agreed at COP21 (see under ‘what else you need to know’).  We can expect extensive discussions and negotiations around these NDCs to ensure that each country’s plans are ambitious enough to stand a chance of limiting global temperature rises to 1.5 degrees.  The World Leaders Summit will be followed by an equally intense programme that focuses on how to achieve the different goals of COP26 (see below) through for example finance and clean energy, and on factors such as youth and gender inclusivity that will be key to delivering climate action.

What COP26 hopes to achieve:

What can we really expect? Will COP26 deliver what we need?

The honest answer is we don’t know.  Success requires consensus, commitment and action from around 200 countries - all with their own politicians, scientists, negotiators, activists, media and other representatives, and all with their own priorities and interests, opinions and ideas, pressures and constraints.  There are challenges !

There are, however,  positive signs… On becoming President, Joe Biden brought the US back into the Paris Agreement after Donald Trump previously withdrew it. America and China have now made net-zero carbon commitments.  Many citizens around the world certainly want to see their politicians succeed, and there will be many activists on the streets of Glasgow during COP26 making those views known.  Boris Johnson wants to achieve success, not least to not look a failure on the world stage.  Alok Sharma, the British politician who is leading COP26 has been travelling the world to drum up support, encourage countries to make their commitments, and build understanding of the challenges.

But there are also major concerns… Covid-19 has obliterated global funds and the financial commitments of developed countries for 2020 have not yet materialised.

Many countries are yet to make sufficiently ambitious targets, some countries have made policy commitments but not legal commitments.  In many countries that have made commitments, there is a huge gap between rhetoric and actual plans and delivery, not least in the UK which, as president, needs to be seen to be leading from the front.

Many of us are hopeful though.  We have all seen the effects of climate change with our own eyes this year including record high temperatures seen from Canada to Spain, wild fires from Greece to America, floods from China to Germany.  The whole world needs COP26 to succeed.

What is the UNFCCC?
The United Nations Framework Convention on Climate Change (UNFCCC) is a global commitment that has now been signed by 196 countries and the EU - that’s pretty much the whole world!  It took effect in 1994 and recognises that there is human induced climate change, sets a goal to prevent ‘dangerous human interference with the climate system’ and tracks both the problem and activities taken to solve it.  It puts the emphasis on developed countries (that have caused most of the effects to date) to lead cuts in carbon emissions and support developing countries financially and technically, to also take action on climate change.

Where does the Kyoto Protocol come in?

The UNFCC only makes a request of countries - to implement policies and actions and report back.  This was operationalised through the Kyoto Protocol, which was adopted in 1997 and came into force in 2005.  The Kyoto Protocol is binding for developed countries, recognising their responsibility for emissions to date, and capabilities to take action.  It turns the request of the UNFCCC into a solid commitment.

Why were COP21 and the Paris Agreement so important?

COP21, held in Paris in 2015, was a historic moment.  Against much expectation, it was the first UN climate summit to result in a universally agreed target - to work together keep temperature changes well below 2 degrees Celsius, and ideally to below 1.5 degrees, above pre-industrial levels.  This became a legally binding treaty, the Paris Agreement, which requires countries to set increasingly ambitious targets (nationally determined contributions known as NDCs) every five years to outline how they plan to reduce greenhouse gas emissions in line with the target and build resilience to climate change.  The first NDCs were due in 2020 but are being presented at or before COP26.  The Paris Agreement also requires countries to report transparently on the actions they have taken by 2024.

What was the recent IPCC report?

The Intergovernmental Panel on Climate Change (IPCC), the UN’s body for assessing the science related to climate change, recently produced their 6th assessment report.  Compiled every six or seven years, the IPCC report brings together the findings of scientists across the world to provide a summary for policy makers.  In August, the IPCC published their 2021 report which found that climate change was unequivocally caused by human activities, that it is already affecting every corner of the planet, and we only have a very short window of opportunity to prevent irreversible catastrophe.  This latest report has given an even greater urgency to COP26. 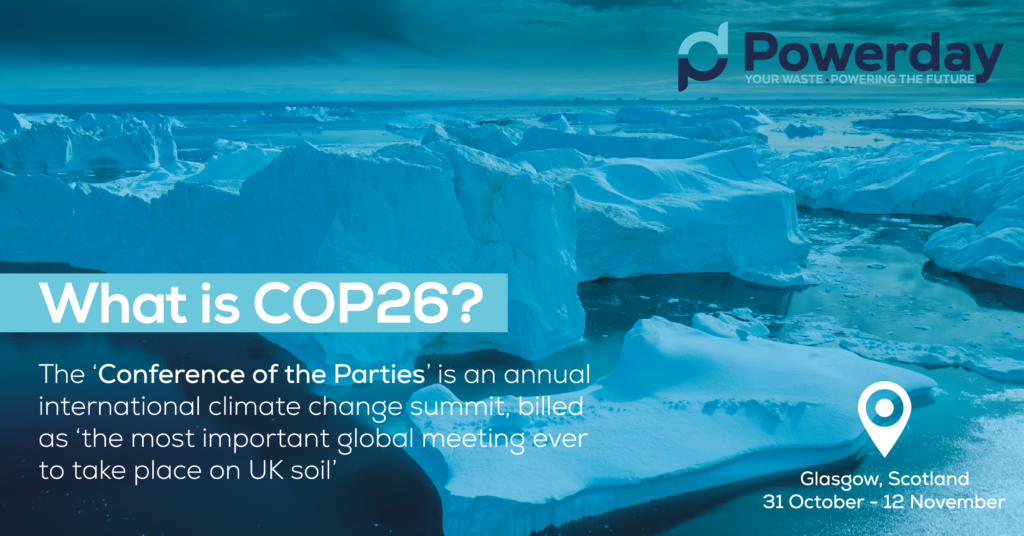