The four year sponsorship deal, in partnership with Sport England Sportsmatch, began in November 2011 with the aim of creating a positive legacy for the London 2012 Olympics. A programme was agreed to expose new participants to boxing through taster sessions in order to support development of the sport across London and increase participation.

Over the last twelve months, London ABA has held 80 new sessions with over 2,500 Londoners gaining a first time experience of boxing. Over 60 clubs and partners including schools, youth clubs and local authority facilities staged sessions which were largely held in areas of deprivation with no other sports on offer. Four new amateur boxing clubs opened within schools in Feltham, Kensington & Chelsea, Sutton and Hounslow.

Keith Walters, Chairman, ABA England and Honorary Secretary of London ABA says: "This unique project has provided London ABA and boxing in the capital with a vibrant and successful London Olympic Legacy Project. The benefits have been evident and received positively by various partners and stakeholders, attracting a large number of new participants, schools and clubs to boxing. We are hugely grateful to Powerday and Sport England for enabling this and look forward to continuing this successful partnership in the years ahead".

Mick Crossan, Chairman, Powerday says: "We are all very impressed by London ABA's achievements in the first year of our sponsorship. At Powerday, we are particularly keen to give young people from all backgrounds a chance to try boxing and to improve their life experience through sport. This project is doing just that and we look forward to continuing the progress in 2013 and supporting the outstanding work of the London ABA."

The Powerday and London ABA partnership continues until 2015. During 2013 the project is looking to increase its funding so that participation, competitive opportunities, and facilities can be provided in a sustainable way enabling these opportunities to continue in the long term. 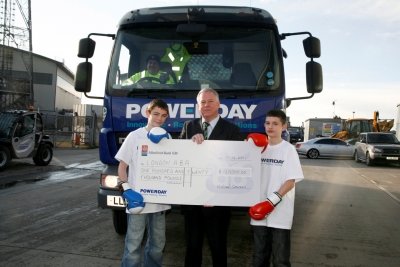