World Environment Day was established by the United Nations (UN) in 1972 and takes place on 5th June each year. The aim is to raise awareness of the environment and encourage positive action by governments and individuals.

Powerday provided two pairs of rugby tickets for the London double header at Twickenham in September and a signed London Irish rugby shirt as competition prizes to help its client to promote World Environment Day to staff.

Rob McCarthy, Senior Environmental Manager, Laing O'Rourke says: "We are very grateful to Powerday for all their support. The whole week of activities generated a lot of interest and we have received very positive feedback."Simon Little, Sales & Marketing Director, Powerday says: "We were very pleased to support Laing O'Rourke's World Environment Day initiative. Rob put in a lot of effort to raise the awareness of the various projects the team are championing to change on site behaviours and recycle as much waste as possible". 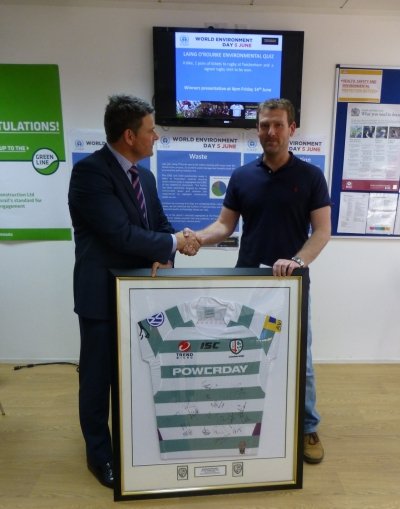