The scheme, which equips candidates with basic skills and qualifications and matches them with work opportunities in the construction and waste industries, expects to achieve the successful placement of all the current trainees, taking the number in full time employment to over 90.

Set up by Andrew Pears, Managing Director of environmental consultancy Kotuku, KELP received Lottery Funding for a pilot scheme in July 2012. Andrew went on to gain Lottery Funding for a further two and a half years after achieving an 80% success rate for candidate employment, significantly higher than Government Back to Work schemes.

Andrew says: “By treating the young unemployed with respect, running relevant and engaging training, and, thanks to our supporters, actually placing KELP’s candidates in full time work, we have shown how the construction and waste management industries can deliver an innovative sustainable youth employment programme”.

From the first course, training has included a day at Powerday’s Materials Recycling Facility in Willesden Junction, along with site visits, practical and classroom work. Powerday has also provided work opportunities for successful candidates and placed them at a number of clients, notably St George, part of the Berkeley Group. It was this three way partnership that led to the programme being shortlisted for ‘Training Initiative of the Year’ at the 2014 Construction News Awards.

Since July 2012, KELP has run 14 courses in which 104 candidates completed the two week training. 87 candidates have qualified as Environmental Labourers by gaining their Construction Skills Certification Scheme (CSCS) card and certificate of environmental awareness. 93 candidates have been placed in full time employment and 108 candidates received mentoring and further training, a key part of the scheme which has contributed significantly to its success rate.

Mick Crossan, Chairman of Powerday, says: “It has been hugely rewarding to play our part in this successful scheme and to give so many individuals, many of whom have had an unfortunate start in life, a chance to turn their lives around. As the only waste industry initiative of its kind we are proud to have been able to contribute to its outstanding success”.

One of the scheme’s many successes was Jonathan Tucker who completed the course in November 2013. Jonathan started work for Powerday in December 2013 as an Environmental Labourer at St George’s Vauxhall Tower and Battersea Reach developments. In June 2014, Jonathan went on to join Taylor Woodrow as an Environmental Apprentice on Crossrail’s Victoria Dock Portal site and is now looking to gain his IEMA Associate Membership. As part of this role, he has visited Powerday to carry out an environmental audit and has also hosted KELP visits on his current site.

Jonathan says: “The KELP course and placement with Powerday was a great route into the construction industry and the chance I needed after being out of work for a few months. It has given me the opportunity to build a successful career and it’s pleasing to be able to give something back to the project and host visits on my site.
The image features the latest intake of candidates with Mick Crossan (far left) and Andrew Pears (second right). 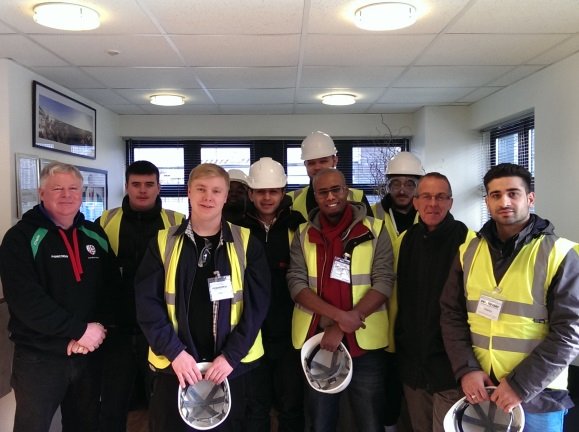