Powerday has sponsored London ABA since 2011 with the aim of building on the London 2012 Olympic Games as a catalyst for change and growth in the sport of amateur boxing. Spotting a gap between regional and international standards and funding, Powerday has worked with London ABA to develop the Boxers’ Bursary Scheme which will make annual awards to support the next generation of London’s boxing talent. This new initiative expands on Powerday’s existing work with London ABA that includes not only the high profile sponsorship agreement but Powerday Pathway. The scheme provides training, qualifications and jobs to young unemployed London ABA boxers in the waste and construction industries, through the highly successful KELP scheme that has already seen over 92 individuals placed in long term employment.

The bursary launch took place at Powerday’s Old Oak Sidings headquarters and home to the company’s state of the art Materials Recycling Facility in the company of professional boxer George Groves and Chairman of England Boxing and Honourable Secretary of London ABA, Keith Walters OBE. The inaugural awards saw eight applicants receive bursaries along with clothing and kit supplied by O’Neills, they included Caroline Dubois tipped to overwhelm the achievements of the first female Olympic boxing champion Nicola Adams.
Keith Walters says: “Whilst there is a strong support mechanism at the top of high performance in British sport, it is the small margins that can make the difference to young aspiring boxers, and this scheme will offer some essential funding to those who are in need of further support to fulfil their potential and achieve international standards. We thank Mick Crossan and Powerday for this investment into our young athletes, who, like George Groves, can become world class stars”.

Powerday’s Chairman, Mick Crossan says: “As a London based company, Powerday is committed to making a positive difference to people’s lives through our work on a daily basis in the Capital. This scheme is part of our community seeking to help young people realise their potential in an Olympic sport, which through their clubs provides them with so many positive messages and lessons for life. My thanks to George for coming along this morning as well, hopefully the time with George will be a further inspiration for these young Boxers.”

George Groves met all the bursary recipients and had photographs taken as well as speaking to the group, he added: “You are all very talented, that's why you are here. Believe me, you are no different to me , if you stick at something you will reach your goal. These Powerday bursaries and O'Neill's kit should spur you on to working your hardest. Listen to your trainers and make sure you make the most of your talent". 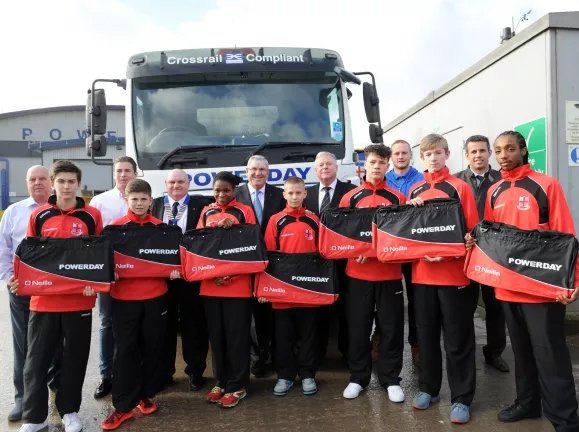