Powerday was recognised at the recent Heathrow Safety Awards for the events they have held at the airport to raise awareness of cycling safety.

Heathrow held its Annual Safety Awards at the Heston Hyde Hotel last night. The awards recognise safety achievements by companies and individuals working on the airport. The ‘Training’ award, recognising a training programme that has had a positive impact on health & safety at the airport, was won by Wilson James for the initiative delivered by them and supported by Powerday and the Metropolitan Police.

The cycling safety events were targeted in preparation for the increased cycle use on and around Heathrow Airport. The aim was to highlight the risks associated with cycling in the capital. This follows a number of incidents in recent times that has led to the tragic and in some cases avoidable loss of life.

Powerday has an ongoing programme of safety initiatives aimed at vulnerable road users supported by the Metropolitan Police, FORS and CLOCS. As we reported in October, visitors had the opportunity to sit in a cab of a lorry and see for themselves what the drivers can and can’t see around the vehicle. These events seek to emphasise the most vulnerable cyclist road positions when in close proximity to a heavy goods vehicles.

Powerday displayed their latest Crossrail Compliant RoRo vehicle fully fitted with cameras and sensors to FORS Gold specification as well as the company’s new skip vehicle fitted with remote control skip lifting systems which are designed to raise safety standards by allowing the operator to have a greater viewpoint by being able to step away from the vehicle whilst operating.
Visitor feedback from the events has been very positive and similar events will now become a regular feature at Heathrow.

Sean Kelly, Operations Director for Wilson James after collecting the award commented:”Powerday's contribution to this very well received safety initiative was absolutely key to its success. The professionalism and enthusiasm demonstrated by the Powerday team aligned perfectly with the Wilson James vision for the event”.

John Batteson, the Heathrow Contract Manager for Powerday, commented: “I think the day was a huge success, with over 180 visitors attending so I’m delighted we have been recognised tonight. The feedback we’ve had is very positive and we are planning another event for the spring”

Powerday has been recycling and recovering the construction waste from Heathrow Airport since 2010. 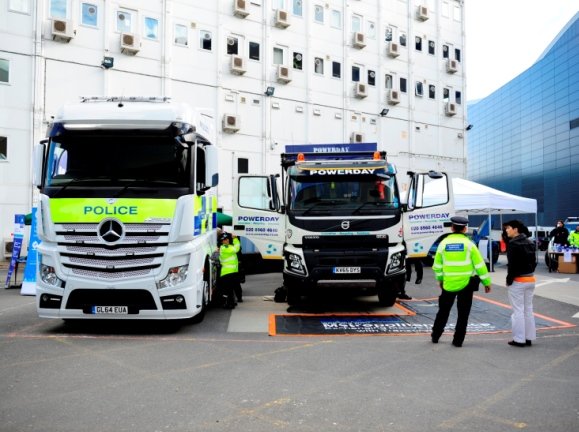