Powerday-sponsored London Irish Rugby Club start their Aviva Premiership season this Saturday, 3rd September, with the London Double Header competition at Twickenham. The club begin their new season with a refurbished ground at their spiritual home in Sunbury, which Powerday is proud to have provided.

This Saturday will see London Irish take on Harlequins at 2pm in their first premiership game and they will be sporting their new Powerday kit. The event marks the first game of a three year sponsorship deal of London Irish by Powerday.

Powerday is committed to supporting London Irish beyond the scope of the sponsorship and have used the pre-season to refurbish their Sunbury ground where the players, coaches, academy and all support staff are based. It is also the home of London Irish Amateur club, also sponsored by Powerday and who have their first game in their new surroundings on the 10th of September.

Kieran McCarthy, Rugby manager for London Irish said, “It’s fantastic for everyone here at Sunbury, and particularly the players. The facilities are looking good and there is a real excitement and optimism around the club and I’m looking forward to welcoming our rugby friends here through a successful season. Mick and his team have done a great job”.

Mick Crossan, Chairman, Powerday says, “We have been pleased to be able to help London Irish acheive a new improved ground at Sunbury. We have repainted the main stand and provided new seats as well as refurbishing the changing rooms and offices and introduced new partners who are all happy to get behind the club. So whether you’re starting out in the Mini’s or a member of the London Irish Team, I hope you enjoy the new surroundings! “

The photo shows the new ground in its full glory with Powerday stadium signs on the stand at Sunbury. 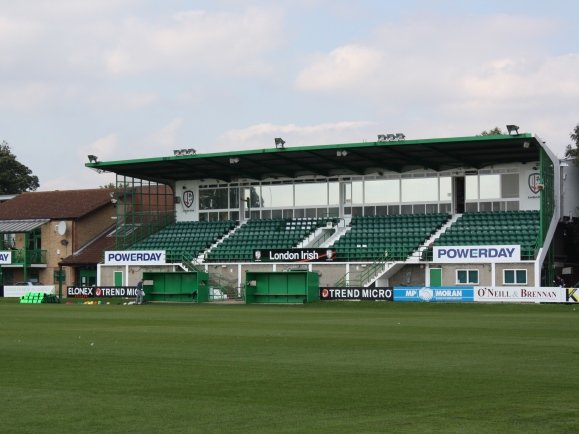