Strongmen VS Rugby brought to you by Powerday

Earlier this month, Powerday arranged a strong man contest like no other. We brought some of the world’s strongest men together to take on London Irish in a series of challenges.

While Powerday’s presence can be seen on the pitch, we continue to mutually collaborate on a wide range of bespoke events – like this unique strong man competition. Likewise, Powerday is a proud sponsor of the Giants Live events and was delighted to bring together the best of both worlds to compete in this friendly and fun competition.

The first of four challenges saw Topsy Ojo compete in the Strongman Hold challenge against world record holder, Mark Felix. In this jaw-dropping test of strength and grip, each contestant was challenged to take the weight of two steel pillars weighing 350kg each. The world record, achieved by Felix in 2020, currently stands at 1.32 seconds and it’s no surprise - despite a 20-second head start for Topsy - that he gave the Strongmen their first victory of the day.

What shortly followed was a shock win for the strongmen as Adam Bishop beat London Irish scrum-half Rory Brand in the day’s kicking challenge. Both contestants were tasked with kicking a rugby ball into a Powerday skip from five increasing distances.

Despite the disappointing loss for Brand, it was straight on to the penultimate challenge, where strongman Laurence Shahlei took on rugby winger Waisake Naholo in the popular Giants Live forward hold or “Hammer Hold” challenge. Each participant stood holding a 30kg giant hammer at arm’s length for as long as they could physically manage. Scooping the win by just one second, thanks to a London Irish 30-second advantage, the rugby team celebrated their first victory

Helping to balance the scorecards in the final challenge, Terry Hollands and London Irish second row forward Adam Coleman went head-to-head in the day’s second rugby-themed test requiring each contestant to throw six rugby balls into Powerday bins, located at increasing distances. And, with Coleman taking the win for the final challenge of the day, it was on to the tiebreaker to determine the ultimate champion.

Levelling the playing field, the “Tumbling Tower’ saw both teams put their dexterity to the test in their final chance to take the title. After much anticipation, the Strongmen’s early lead came to a crashing climax, with London Irish scooping the ultimate accolade as winners of the friendly “Punt vs. Grunt” competition. 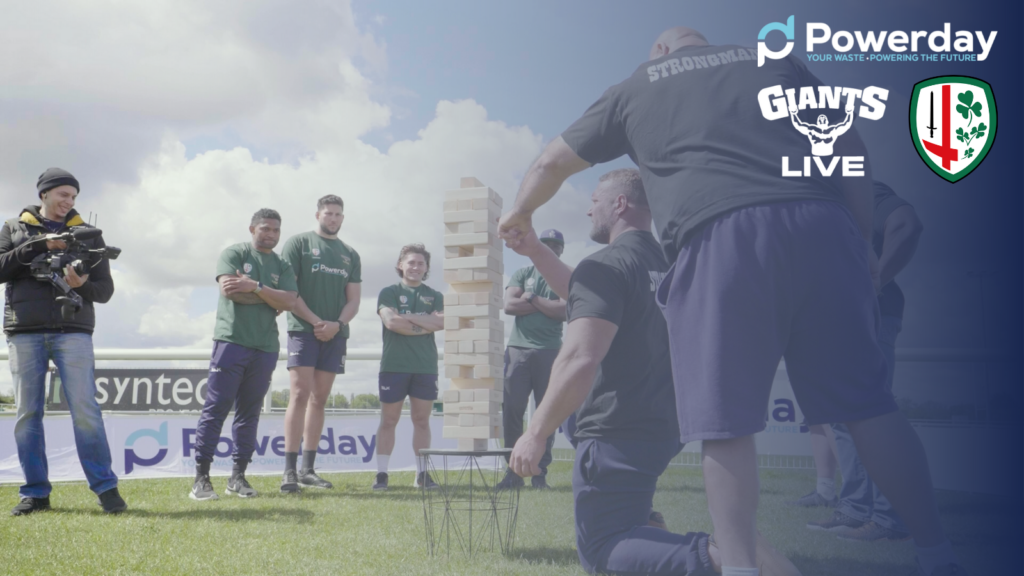